Home » Puglia in the foot of Italy offers great-value property

Puglia in the foot of Italy offers great-value property

Fleur Kinson gives you the latest on this unique, much-loved southern region.

The high heel of the Italian boot looks and feels like nowhere else in Italy. You might be on a Greek island here – washed in dazzling light, surrounded by low white-washed buildings, and gazing onto an omnipresent blue sea which hugs the region from two sides. Colourful, exotic Puglia is a beguiling and stimulating place, with its own distinctive food, architecture and atmosphere. Its landscapes have an appealingly elemental quality – stark rocks meeting clean beaches lapped by crystal-clear water; gigantic olive trees spiralling up from dark red soil fringed by vivid wildflowers; fragrant pine forests opening onto chalk-white sands. Nature’s colours are bold in Puglia, and man-made shapes are simple – with chunky, cubic houses and conical-roofed cottages dotting the countryside. You soon get hooked on the region’s unique, striking flavour. Puglia is southern Italy’s big success story of recent years. A prosperous and orderly region, it has the south’s lowest unemployment rate and a rock-bottom incidence of crime. Puglia offers the long, hot summers and often bright, balmy winters of Italy’s far south, but with fewer of the socio-economic problems sometimes associated with il mezzogiorno. There’s little evidence of poverty or corruption here. Puglia has Italy’s lowest average rainfall, and, as a wonderful bonus, its southern half has almost no earthquake activity – unlike the rest of central and southern Italy. Of course, all the best of southern Italy is down here too – super-healthy food, open spaces, low population, a strong sense of family and community, and an easygoing lifestyle. Puglia remains the most popular southern region among foreign buyers. It’s easy to see what draws them down here, and it’s not just the low property prices. 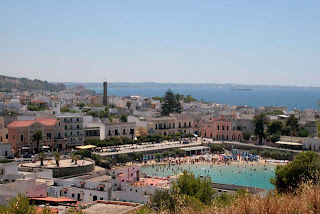 Italy, Puglia, Santa Maria al Bagno
THE BUYING GAME
Puglia was little heard of in Britain until 2004, when budget airlines first began serving the region. A flurry of interest followed immediately, and since then Puglia’s reputation has grown steadily – both in the UK and in other European countries. The recent recession hasn’t affected Puglia’s property market too badly. Today, foreign buyers are still interested in the region, and it’s expected that the recent introduction of two new Ryanair routes into Puglia (from Paris and Stockholm) will bring yet more interest over the coming months and years. Some agents report that property prices in Puglia are down by as much as 15 per cent compared to what they were three years ago. But this decrease isn’t consistent across the region. In particular, property on the coast seems to have held its value particularly well. Prices of seaside homes are very little changed, and the Puglian coast is still tipped as a very good place to put your money.
As for actual prices you might expect to pay across Puglia these days, here are some general pointers. Modern two-bedroom apartments within easy walking distance of a beach start at about €100,000, while nice three-bedroom villas on the seaside start at about €250,000 – or if you buy off-plan they might start at €160,000. Inland, a small rural property or a conical-roofed trullo needing restoration might ask as little as €30,000. A simple modern villa with two bedrooms might ask €70,000, or with three bedrooms €100,000. Fine rural villas in lovely locations can ask €250,000 or more. Meanwhile, sumptuous mansion-farmhouses (masserie) range from €500,000 to several million. Puglia really does have a very wide range of prices and property types, and it’s worth having a good look around to see what you can get for your money.
Puglia also has a particularly rich range of property types that are each worth considering. Like everywhere else in Italy, there are new-builds, off-plan properties, modern homes needing redecorating, old homes needing restoration, apartments, villas and townhouses. But Puglia also has a special lexicon of indigenous building-types distinctive to the region: namely, the trullo, the masseria, and the lamia. Trulli are the little conical-roofed cottages that look like something from fairyland. They were very big with foreign buyers when Puglia first came to international attention several years ago. Then they fell from favour, but currently seem to be growing in popularity again. Masserie are grand, fortified farmhouse-estates, holding great appeal to luxury-buyers. Lamie are flat-roofed, foursquare cottages – invariably whitewashed – that sit dotted like little sugarcubes on the undulating Puglian landscape.
WHAT TO CHOOSE?
According to Francesco Distante of Casa Puglia, modern-built villas in the countryside or on the fringes of charming old towns represent some of the best value for money in Puglia these days. “Simple modern villas built in the 80s or 90s, which just need some redecoration, are great value,” he says. In nice areas such as San Vito dei Normanni, Francavilla Fontana, Fasano or Locorotondo you might get a two-bed modern villa for €70,000, a three-bed for €100,000, and a four-or-five-bed for €250,000. These are great prices for buyers seeking a rural retreat in the Italian sunshine.
Many agents highlight Puglia’s coast as the best place in the region to buy property right now. Seaside homes have held their value best since the onset of the recession, and as you can readily imagine, they offer the strongest holiday rental prospects if you plan on letting out your home when you’re not there. Luigi Spano of the Puglia specialist agency SIS Property and Tourism says “If I were to buy a home in Puglia today, I would choose a coastal property. It will keep its value in the worst times, will increase in value by 8-13 per cent each year in normal times, and will give me a rental income of 3-5 per cent.” Luigi particularly recommends buying off-plan as a route to big savings, saying that you are likely to pay 20-25 per cent less than the final price of a property if you buy before building is complete.
Carlos Gentile of Gea Properties is very enthusiastic about new-builds in general. He says that foreign buyers in Puglia have until now tended to buy older homes, since these were the types of properties most likely to be on the books of local estate agents targetting foreign buyers, and that therefore the under-exploited new-build market currently offers great value. New-builds in Puglia haven’t been widely marketed to foreign buyers until recently, and certainly you can find some good prices in this sector. New-build two-bedroom apartments on the seaside might ask as little as €100,000, three-bedroom villas about €250,000.
READ THE FULL ARTICLE at http://italia-magazine.com/puglia/puglia-property-buying-guide
>>> Back to SIS Homepage https://www.sispropertyandtourism.co.uk/