SIFF Best of the Fest Goes to Moscow and St Petersburg

Following Zurich, London, New York and Hong Kong, Moscow and Saint Petersburg are the next world capitals to recognize the cultural and artistic value of the Salento International Film Festival. A Film Festival devoted to the international independent cinema and that has become well known for the quality of its content and the attention to contemporary cultural expressions. 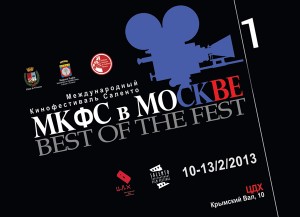 The Salento International film Festival (SIFF) is a celebration of films and filmmakers, promotes international independent films, in recognition of the fact that movies are the most powerful form of cultural communication and link between cultures’ and peoples’

For the past years SIFF organized and run a world tour, taking the festival to international destinations and presenting the “BEST OF THE FEST” event. This is an opportunity to showcase to an international public, in prestigious locations, some of the best movies presented at the festival, increasing the visibility and appreciation of such works which struggle to find a distribution channel.

During the Festival in Moscow and Saint Petersburg, local filmmakers will have the opportunity to submit their work to entry a special section in the 2013 Salento International Film Festival called: FOCUS ON CONTEMPORARY RUSSIAN CINEMA.

On February 12, 2013 at the Central House of Artists Andrey Zvyagintsev in person will receive the “SALENTO DIRECTOR AWARD” which recognizes a Director for their visionary achievement in Cinema.

The event is organized by Salento Cinema in collaboration with Central House of Artists Moscow, Lendok Film Studio Saint Petersburg and supported by the Italian Cultural Institute of Moscow and Saint Petersburg, Consulate General of Italy Saint Petersburg and the City of Tricase (home of the SIFF) with the Patronage of the Tourism and Cultural Affair of the Apulia Region.