The mistery of Obama cake, recipe for Italian baker’s success

Naming a chocolate cake after US President Barack Obama has helped a small bakery in Salento, a region in southern Italy with acute unemployment, defy the economic crisis. The move has been described as “cunning marketing”. 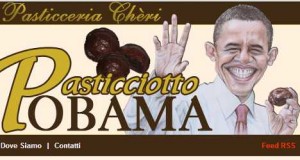 The marketing mix has been so successful that baker Angelo Bisconti is marking US Independence Day, July 4th, with the opening of a new factory on Thursday evening in his town of Campi Salentina, where ten new staff will produce more ‘pasticciotto Obama’, a type of pudding.

Business has gone so well with the help of the president’s name that the Chèri kitchens now produce 5,000 Obama cakes a day, Bisconti said. The cakes are even sold to the Brio in New York, an Italian restaurant owned by Carlo Scoditti. Scoditti will be among the privileged guests this evening, Bisconti added.

Bisconti said that the special cake was his way of honouring America’s first black president.

The unlikely presidential marketing ploy dates back to November 5th, 2008, when Bisconti and his team were scouting for a different recipe for their normally white pasticciotto, he explained. After tweaking some of the ingredient measures and adding cocoa to the mix, he and the rest of his baking team were delighted with the results.

As they wracked their brains for a name, news that the United States had elected its first black president broke on the radio.

“That was when the name came to us, it was our tribute to the new president,” Bisconti said.

“We just changed the system we used to make the pasticciotto.”

According to the Obama cake baker, his tasty treat even has the blessing of the US ambassador to Italy, David Thorne, although The Local was unable to confirm the claim with US embassy officials in Rome on Thursday.

To help promote the cake, Bisconti launched a website featuring a caricature of a smiling President Obama, holding a pasticciotto.

Ferrucio Pastore, director of the International and European Forum for Migration Research in Turin, said that although the caricature is somewhat questionable, the move is an example of cunning marketing.

Read the full article on TheLocal