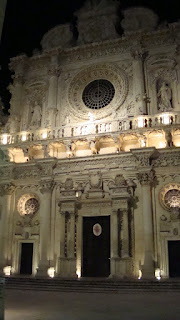 Even the “fast” train from Rome takes nearly six hours to get to Lecce, labouring over the Apennines before dipping across coastal flatlands and endless olive groves, past places like Monopoli, whose names recall the Greek heritage of Italy’s deep south.
In the baking summer heat it is a relief to enter the walled city of Lecce – the harsh light is absorbed by the famed limestone of its buildings. Spared the hordes of foreign tourists that cram the renaissance cities of Venice and Florence, Lecce has a provincial charm. The churches are quiet, but this is a university town, with a buzz in the bars, pastry shops and bookstores.
The city is a delight to explore on foot, each turning revealing another architectural treat. To understand the story behind the architecture, I hire a guide, Simona Melchiorre, a local historian, who is passionate about her home city. She tells me the stately grandeur of courtyard villas, some occupied by descendants of their original owners, and the refined elegance of the churches conceal a darker passage in Lecce’s history. Following the persecution of Jews in Spain, Charles V expelled the city’s Jewish population in 1541. Wanting space to build a castle, Charles V moved the church and local nobility into the former Jewish quarter.
A stone foundation block below ground level in the Palazzo Adorno reveals an inscription in Hebrew, “House of God”, testifying to its origins in what had been the local synagogue. Other Jewish remnants went into the construction of Lecce’s Church of the Holy Cross, consecrated as a basilica by Pope Pius X in 1906. Building started in 1549 and took about a century to complete. While the side chapels are richly ornate, the basilica – in Greek-Roman style modelled on the Temple of Jerusalem – is light and airy, beautifully proportioned with 12 pillars.
There are several villages close to Lecce where the inhabitants still speak a form of ancient Greek, while at the Church of Saint Nicholas in Lecce the liturgy is in Greek according to the Byzantine rite.
Before moving on, my guide introduces a local, heavenly treat – black coffee doused with ice and almond milk (caffè in ghiaccio con latte di mandorle) and oval-shaped lemon custard pastries (pasticciotti).
Being inland, on the southeastern tip of Italy’s boot, Lecce was spared the sieges and destruction that befell the Norman cathedral ports, such as nearby Otranto where the bones and skulls of 800 Christians martyred by the Ottomans are on display in the crypt.
When the coastal towns declined in status with the discovery of the Americas and trade shifted from east to west, Lecce survived on the backbone of its rural economy and its importance as a religious centre.
Yet the 20th century was less kind and in the 1970s much of the city lay in disrepair, its tobacco and textile industries unable to match east European and Chinese competitors.
But efforts to regenerate the area, from the late 1980s, appear to have been a success. So much so that a visitor to the city could be tempted to place Lecce less in the company of chaotic southern cities like Naples and instead with the far away prosperous north. Yet the burghers of baroque feel very much of the south.
Lecce’s architectural history can be surveyed in one sweep across the main piazza, Saint Oronzo. Towering above the scene is a statue of Lecce’s patron saint (Saint Oronzo) perched atop a 25-metre-high marble pillar from Roman times that had been one of two marking the end of the Appian way, stretching across Italy to Brindisi. The column was donated to Lecce by the people of that Adriatic port to mark the saint’s reputed triumph over the plague in the 1600s.
Next to the square is the half-uncovered Roman amphitheatre, which was once big enough to seat up to 15,000 people. It was discovered in 1908, having been lost in the 1500s. Excavations were carried out under Mussolini, who was intent on rebuilding a national sense of empire. In the process, the renaissance-era town hall on the square’s edge was demolished, and municipal buildings erected instead.
The severe buildings are yet another reminder that Lecce’s compelling character has been forged out of so many diverse influences. Written by Guy Dinmore is the FT’s Rome correspondent
http://www.ft.com/cms/s/2/2f32b6a2-48da-11df-8af4-00144feab49a.html
>>> Back to SIS Property and Tourism homepage >>>